Improving your Home?
A Solar Energy Water Heater is a great first step in contributing to the sustainability of our environment for generations to come.....

Solar Energy Water Heaters have been around since the 1800's and the first commercial system was patented by Clarence Kemp in 1891 already.

Since those early days solar technology has gone through major transformations, and today we are lucky enough to have efficient, relatively inexpensive solar systems for the home.

And with the global energy crisis, we as home owners have a responsibility to contribute to saving our environment and this is one of the things we ALL should do..... not only to add value to your home, but also to make your contribution to a sustainable, greener world.

Lets look at a step-by-step guide to plan, design  and implement this DIY project.....

The following are design requirements you need to consider when you plan your solar energy water heater project. This information will be readily available at your local renewable energy service provider.....

(or on the internet, then you are much more prepared when you arrive at your solar energy water heater supplier to discuss your system). 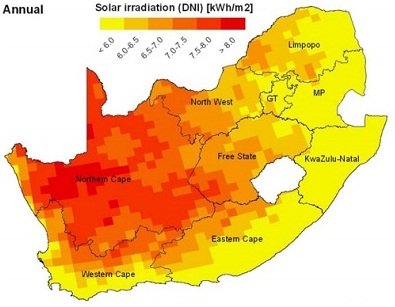 So here in South Africa this is not an issue, except for the fact that we must select a system that will not stagnate during the summer months.

What other factors will have an influence on the solar radiation in your area and therefor your system design......

Changes in ambient temperature between winter and summer will have an effect on the system you choose.

Also the changes in temperature between the day / night cycle for each season has an influence.

Stagnation, where the system overheats because of under usage, is a huge issue, especially for evacuated tubes. Runaway heating can cause internal temperatures to rise as high as 200 degrees Celsius.

Apart from creating a serious hazard, this degrades the insulation around the pipes, drastically reduces the life of the water cylinder, and ultimately wastes water by causing the safety valve to open and the overflow to dump the water.

This paragraph courtesy of the Popular Mechanics magazine, August 2013

At the opposite end of the scale, as ambient temperatures drop below zero, is the issue of freezing. This causes water trapped in flat-panel systems to expand and pop their copper channels.

Then, as it gets warmer, you effectively end up with an expensive leaking sieve bolted to your roof.

To overcome the system, indirect heating systems – where the panel is filled with an anti-freeze solution that passes through a heat transfer unit – were developed.

However, the anti-freeze needs to be topped up on a regular basis and replaced biannually, which adds to the hassle factor.

There is also a drop in efficiency of at least 30% because the water is not heated directly.

This paragraph courtesy of the Popular Mechanics magazine, August 2013

The minimum requirements of your system will most probably be determined by the amount of hot water and the temperature thereof you and your family need during the cold winter months. In winter the sun's output and the water input into the system is at the lowest.

The maximum output of the system is determined by the need to prevent stagnation during the hot summer months.

So what is the solution then you may ask?

Well, the most important thing I wanted to highlight here was that you know what to look out for when you select your solar energy water heater, as the wrong choice will NOT add to the value of your home and will cause you huge amounts of frustration.

Have your say about what you just read here! Please leave me a comment in the box below.


Top of the Page

This site uses British English, so the spelling of certain words (like colour or favourite) may seem unfamiliar to some.
They are nevertheless correct.